DRYiCE iControl (iControl) provides the business context to operational events by linking application, business units, and products to a business flow supporting delivery of a product or service to an endpoint. iControl resolves the challenges with data sanity/accuracy to enhance Target performance monitoring and add predictive real-time monitoring through Machine Learning and a growing list of dashboard widgets.

A new Flow Performance Page that lists all Flows and ‘current’ active target status, active period, and last observation status has been launched. 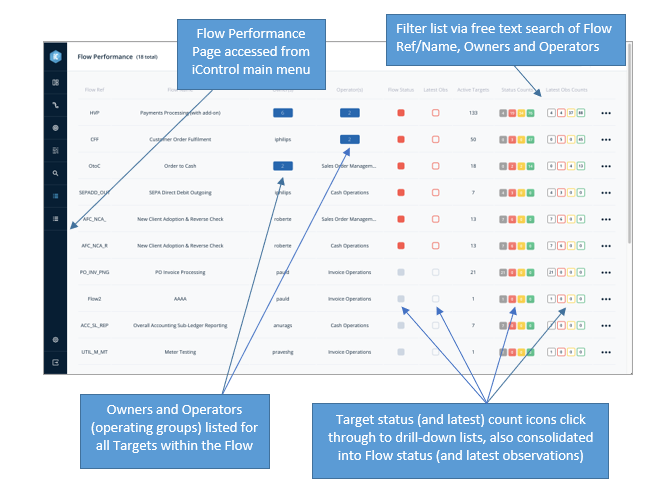 In the next release the Flow Performance page will be extended to allow historical lists for timeframes 1 week, 1 month, 3 months, etc. Also, export Flow Performance list functionality will be added.

Flows and associated widgets have been enhanced to display dependency warnings and breached targets that put other (downstream) Targets within the same Flow at risk of breaching.
For example, due to the non-arrival of a file by the ‘cut-off’ time a target is breached, putting associated downstream cut-off targets within the same process flow at risk. The at risked targets are set as ‘Warning’ so that associated systems owners and operators know that upstream issues are putting their process and SLAs at risk.

Note: Downstream ‘Cut-off’ Targets, where the associated threshold event has happened (e.g.: the file has arrived, the process has completed, etc.), are not triggered by dependencies even if they are downtream of a breached target, so once their status is set to Not-breached they cannot be set to Warning status (though a dependency is associated to the ‘Cut-off’ Target for possible Warning at the start of the next active period). Future improvements include additional information added to the tooltip to identify the target(s) and nature of the upstream breach(es) creating the target warnings.

Within the Flow widget, hovering (mouseover) on target count/status icons now displays the associated target list as a ‘pop-up’ which, by using the mouseover, will display the listed target observation widgets. 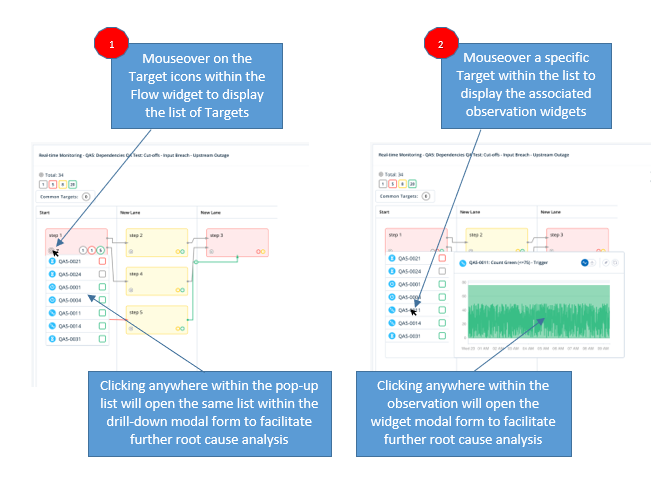 ‘Pop-up’ lists are accessible from Step and Link icons within the Flow widget, as well as via the Common and (unassigned) Target buttons below the header (if present). They are not accessible from the header counts/icons, these access the standard Target drill-down modal list.

Other Features and Enhancements

In total there were 121 JIRA tickets completed including enhancements, improvements, new fixes and features added as part of this release. Below are the key highlights.

iControl is a product within the emerging market sector of operational intelligence – technology solutions that leverage analytics to help end-users continuously monitor and manage business operations in real-time.

iControl forms part of a combined software and services solution developed by DRYiCE around “Business Flow Monitoring” which enables its customers to monitor, measure and report on the impact of IT performance in delivering business outcomes.  Today iControl is primarily used by the project team as an implementation tool.

Key elements of a Business Flow Monitoring implementation are to:

For sales-related inquiries, please reach us at support.dryice.ai@hcl.com